From Yeovil to Ploiesti – An Unexpected European Tour

Matthew Phillips, a friend of mine (and perhaps the most dedicated Swansea fan on Earth) recently traveled to Ploiesi in Romania for the second leg of his beloved Jack’s Europa League Play-Off tie.  Matt’s first away game was Yeovil in 2003, with European football as likely a prospect to Swansea City as them going on a meteoric rise to the Premier League and winning a trophy. Wait a minute….

What follows is Matt’s account of a trip he surely never expected to take:

I’ll admit I never really cared about the Europa League until Swans lifted the League Cup at Wembley in February, then I started to get a little excited about the prospect of watching  the Swans play away in some far flung European towns and cities. Beats Carlisle away on a Tuesday night (Just!). In the last round the Swans faced Swedish team Malmö FF who we comprehensively beat 4-0 in the first leg, making the away game a nothing game really. I still wouldn’t have missed it for the World though, my first ever European away game with my club.

Swansea were then drawn against Romanian team Petrolul Ploiești (who? We all said!) in the Play Off Round of the Europa League, the last round before the group stages. In 1857, the first oil refinery in the world was inaugurated in Ploiești, hence where the name ‘Petrolul’ originates. Petrolul were originally calledJuventus București and moved to Ploiești in 1952 (sounds like MK Dons!) and they have won the Romanian league 4 times. They had beaten Vikingur (Faroe Islands) and Vitesse Arnhem (Netherlands) to reach the Play Off Round.

I had never been to Romania before, but I do like Eastern Europe. I have been away to that side of the World numerous times with Wales, always cheap and cheerful

I quite liked Bucharest as a city, it is a developing cities in parts, but also still has some very ‘run down’ buildings and places too. All the Romanians I came into contact with seemed very friendly and nothing like the horror stories I heard from people before I went. What I did like was how vibrant it was in the evening time, it reminded me of when I went to Belgrade last year, from around 10 o’clock at night there are loads of people in pubs, chatting and having a good time. I just wonder when do they sleep and work!

The day of the game arrived and I didn’t want to waste any time, to try and do some sightseeing, it was like a ghost town (probably due to the locals being out so late the night before), bar delivery workers, builders and lots of stray dogs! I’m personally not a fan of dogs, but these strays, for some reason started to follow the 3 of us this particular morning. We go right, they go right, we turn around, so did they. Eventually they were chased away by a Romanian, who must’ve noticed our slight concern. We then disappeared to have breakfast – dog free.

After reading on Google, there are 65000 stray dogs in Bucharest and last year 16000 people were bitten by them, the reason why there are so many stray dogs is not clear, some put it down to when Romania was a communist country run by Nicolae Ceausescu, but the Government or anyone else don’t seem bothered to do anything about the problem now, so doubt it will change any time soon.

The other thing that tends to happen in Bucharest is the reluctance of restaurant and pub staff to give change, they seem to think that if you pay 100 Romaian Lei (£25) for something that costs 20 Lei, then they get to keep whatever is owed as a tip. I understand it is a poor country, but I’d like to be able to choose the amount I tip. Something else I was mindful about afterwards.

A nice walk through Cișmigiu Gardens followed and it was off to catch the coach to Ploiești, thankfully Mark from ‘On the Ball Travel’ had managed to organise a coach to and from Bucharest, as there were no trains after the game and taxi drivers can rip you off. I thought Swansea City may have tried to help fans out, but we don’t seem to be the priority these days. So thank you to Mark for organising the trip, or we’d have been stuck in Ploiești.

The journey took around 45 minutes, we also picked up some Swans fans from the airport en route. There was a heavy police presence around the town, but we were told by Swansea’s Police Liaison officer that they were there to protect us, but there were no restrictions on where we could visit.

I am used to heavy police presence in this part of the World through watching Wales. I remember the police watched Welsh fans at every corner in Serbia, but they were more worried about the Serbians than the Welsh, similar situation here.

The 4 of us went to the ground, as for anyone that follows me on Twitter, I do like to have photos inside and outside football grounds. As I was snapping away I noticed this guy milling around but didn’t really think any of it. He introduced himself as Michael and told us he was a plain clothed police officer who would following around in Ploiești, but we could go wherever we wanted.

I will admit I was a bit sceptical at first to who he really was, but Michael showed us photos of his visit to Swansea a week earlier and the more he talked, the more I was then convinced. I have never had my own personal police escort around a town before, so definitely a new experience for me!

A fter a tour of Ploiesti (which took about 3 minutes) Michael showed us where the other Swans fans were based, in a pub called the Doroftei – which is named after a former WBA Boxing Champion, Leonard Doroftei. I’d not heard of him either, but I wouldn’t want to tell him to his face!

After around an hour or so, the 4 of us headed off to the ground (just to keep up my reputation of being at a ground ridiculously early), the Petrolul fans were out in force, but I personally didn’t see any trouble.

As kick off approached the Petrolul fans were in full voice, I have never heard an atmosphere like it. If no-one knew the score, you’d never think they were 5-1 down from the 1st leg. I wasn’t watching the first 10 minutes of the game as I was just in awe of their fans. Despite what others who weren’t there may say about the laser shone in Gerhard Tremmel’s face (which we had no knowledge of at the time). I thought they were fantastic from start and finish, they got behind their team from the off. Our fans can be good on their day, but I doubt we would have been anything like they were. They were very impressive with their holding of the scarves and jumping up and down, was a pleasure to see and hear it.

I won’t go into too much detail regarding the game itself, I’m not very good at remembering who crossed for who etc, but in short Petrolul were the better team on the night for me. Whether the intimidating atmosphere played a part or the fact we were 5-1 up I’m not sure, but we got through and that’s all that matters in these type of games. Saying that, thankfully we were so far ahead from the 1st leg or we could easily have been knocked out. We tried to sing in the caged away end, but it was impossible, just got drowned out every time. They were briefly silenced when Roland Lamah equalised (Yes I was surprised as he was when he scored!). I wouldn’t begrudge them the win though. 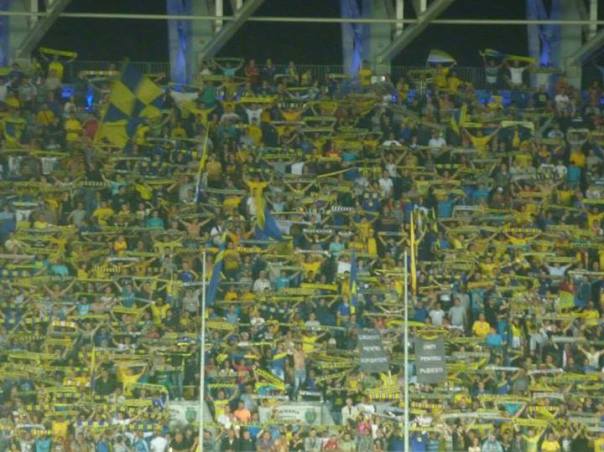 The Petrolul players had a lap of honour at the end, everyone, Swans fans included showed their appreciation and applauded them off the pitch. In contrast the Petrolul fans called the Swans fans and a few swapped flags and scarves with each other, was nice to see. After a 20 minute lock-in (common practise in this part of the World), we were let out and got on the coach back to Bucharest with everyone eagerly anticipating the Europa League group stage draw (has nothing on the Johnstone’s Paint Trophy does it?)

As it turned out the Swans were drawn against Valencia, Kuban Krasnodar and St Gallen, it could’ve been a lot worse, travelling wise. I know nothing about the latter two teams. All in all I enjoyed the trip and venturing into Eastern Europe again, we’re still on a European Tour until at least December. Should bring an interesting mix of styles and fans.