← The worst football opinions of all time
Allez les rouges →

Just too good to be true

What happens when you get everything you ever wanted? When everything you’ve ever dreamed about while spending a 15 hour delay sleeping on the floor of Kiev airport comes true? After spending 20 years watching your team be the laughing stock of Europe?

11th June, 2016 – Bordeaux. That was the time and place that I would find out the answer to all of these questions. On a beautifully sunny day in the south of France, the dragon would sleep no more. And when it awoke, it breathed a fire that made the whole of Europe sit up and take notice.

Ever since I had watched Wales qualify in Zenica last year, this was the day I had waited for. The opponent was rather ironic, in that they were also the opposition for the worst Wales performance I’ve ever seen – a 5-1 demolition at home in a Millennium Stadium that started half empty and was soon even less full than that. Slovakia is one of the names that brings back very bad memories for long term Wales fans, along with Russia, Romania, Moldova and plenty of others.

Even though Gareth Bale was in the team that day, this was by no means the same Wales team. Back then he was a scrawny 17 year old at Southampton, now he is a world elite playing at Real Madrid – and with his emergence into stardom has come Wales.

Many times I have seen Wales play at with less than 30,000 people, yet here we were taking that many people to an away game. The atmosphere in the streets had been absolutely amazing all day, especially when the time came to board the trams and buses to the stadium. I can’t have been alone in feeling as though this wasn’t really actually happening. Not to us. Not to Wales.

But it was. It really really was. I had planned to get into the stadium early (not quite as early as the famous Matt the Jack who was probably in the stadium in March) and was at the ground two hours before kick off. As I was walking to the gate I found a local brass band playing music to a crowd that was in two very distinct groups. The fashionable locals, standing in a circle and applauding politely, and the Welsh, completely off their face and jumping about in the middle like maniacs. Once again, my nation made me incredibly proud.

So I took 40 minutes to jump about with dozens of others, twirling bemused locals around to the strains of Cotton Eye Joe and singing along to the French anthem with the worst pronounced French the area has possibly ever seen.

It was soon time to enter the stadium, and I did so with the biggest smile on my face imaginable. I looked around at the others who were coming in at the same time as me, and they looked just the same. You often hear smaller countries players and coaches talking about “not wanting to be happy just to be there” but it’s clear that’s exactly what we were.

It had been pretty clear from the streets of Bordeaux that Wales had far more supporters in the city than the Slovakians, but the full extent of the Welsh invasion could only be fully appreciated once inside the ground. About 75% of the stadium was red, and most of the locals also seemed to be behind us. The behaviour of the Welsh fans and the warmth of the locals has certainly created a love affair between Wales and Bordeaux that will last a very long time.

10 minutes to go before kick off, and local kids helped to present a giant Welsh shirt on the pitch, before finally the players emerged. For the first time since 11 heroes trooped off the pitch in 1958 having lost the World Cup quarter final to Brazil, Welsh footballers stood on the field at a major tournament once more. The noise and emotion from our fans was something else, with 30,000 or so people having the same thought. FINALLY. Finally it’s our turn. 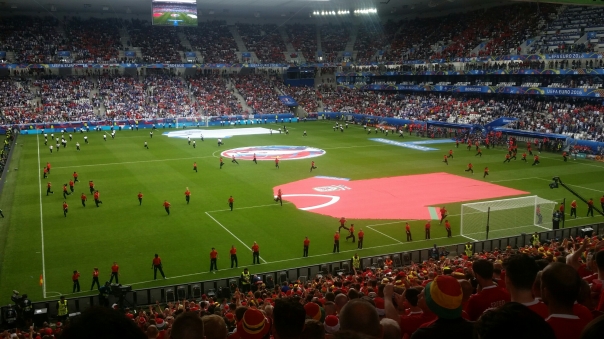 After a great rendition of the Slovakian anthem from the very loud but outnumbered fans at the other end of the ground, it was time for the moment I’d dreamed of for years – singing the anthem at a major tournament. I’m not ashamed to admit that I was in tears by the end, as were the two guys next to me, one a Swansea fan and one a Cardiff fan but united as one – the days of club rivalry at Wales games left behind in the last couple of years.

The game kicked off to a huge roar from the Welsh fans, and an amazing atmosphere. It was almost cut short within minutes however, as the dangerous Marek Hamsik turned our defence absolutely inside out and shot the ball beyond Danny Ward in goal. I was utterly convinced we were 1-0 down, but Ben Davies made a frankly unbelievable block on the line that I celebrated more than most goals I’ve ever seen. I’ve watched the highlights a few times since and I still don’t know how he did it.

My seat was at the very end of the back row in the bottom tier, and not really knowing what to do with myself I charged down them while jumping on anyone I could find in the middle. It wasn’t really a joy celebration, it was more of a “holy shit that actually happened” celebration, and much of the game seemed to pass in a blur after that. I know Slovakia played well and created some chances, while Wales and particularly Joe Allen and Aaron Ramsey produced some passing so good that it should be on an adult website, but that is about it.

Half time soon arrived, and by chance I happened to see a friend called Haley, someone I’ve seen at Wales away games for a long time. She had almost no voice left but simply said “What is happening?” I couldn’t answer, because I was just as dazed myself.

Slovakia came back strongly in the second half, they really are a good side (bad teams don’t win 3-1 in Germany) and it seemed like a goal was certain despite my confidence in our defence. It arrived after 15 minutes of the second half, and we couldn’t say they didn’t deserve it. 1-1 then, and for a few minutes longer we were being overrun. My pessimism built up over a lifetime kicked in, and I was just waiting for them to go ahead.

Thankfully Chris Coleman didn’t panic so easily. I’m happy to admit I didn’t initially support his appointment and thought he deserved to be sacked early in his reign, but he has developed a management style that will put him on the list of Welsh football immortals.

With about 20 minutes to go, two very important moments happened. The first was the introduction of Joe Ledley and Hal Robson-Kanu – two key players from the campaign who had not started due to injury – Ledley had broken his leg just over a month ago and yet somehow he was here! These players helped our tired side to get the momentum back and to turn the game back in our favour. But it was not just the players who did that.

The crowd also had their say, replicating the famous win over Belgium in qualifying by singing a stirring version of the national anthem. To a man woman and child it was belted out at the top of our lungs – the press in Bordeaux would later say that the song would echo around the city forever.

Nine minutes to go. Aaron Ramsey stumbles but somehow manages to keep going. He finds Robson-Kanu, who doesn’t catch the ball cleanly. But hang on, it’s beaten the goalkeeper…oh my god it’s going in…

And there it was. The perfect moment. The moment you create in your head or on a video game, because of course it would never really happen. But it did. It has.

Three quarters of the stadium is in absolute delirium. Most of the people around me are swinging their shirts in the air above their head. Suddenly I realise that I am also doing that. I hug the people around me, many I’ll probably never see again and yet somehow will see forever, because they were part of the best moment of my life. For them also, I’m just a stranger with who they shared two hours, but two hours that will echo into eternity.

I’m writing this report a few days later in a dodgy hotel room in Paris, and even as I try and shut out the sounds of sirens and pissed off taxi drivers outside, the hairs on my arm stand up as I think about it. That it really happened.

There was still time remaining in the match, and the four minutes of stoppage time seemed to last as long as the wait from 1958 to 2016, the period of time we had waited for a moment like this. But the whistle did come, and we did win.

After celebrating with everyone around me, I suddenly needed to sit down. I sat on the floor in the middle of the stand, back against the wall where one of hundreds of Welsh flags had flown. As people began to head out of the stadium to celebrate, the words of one of the songs sung at every Welsh game came to my head.

Dreams do come true. I know, because the dreams of a nation did. At long last… 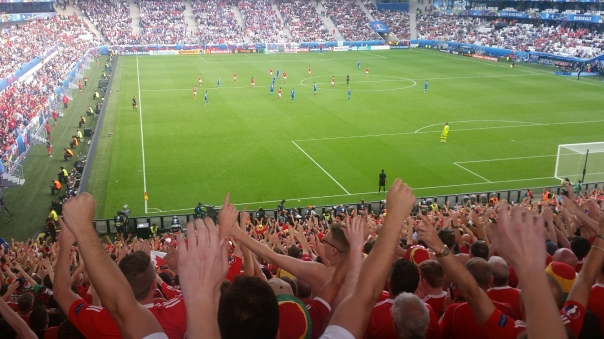 ← The worst football opinions of all time
Allez les rouges →