To keep things fresh and ensure that I can give football culture outside of Europe the attention it deserves, I have decided to introduce a new feature which will be published every Monday (apart from when I forget), which will show my favourite tifo from the past week, as well as my favourite individual ‘scenes’ moment. This doesn’t have to be a derby victory or a 93th minute winner, but simply a moment that makes you wish you were in the middle of the mayhem. I first had the idea for this feature after spending about three hours earlier in the season trying to find a video of Sunderland supporters losing their collective minds in the 90th minute at St. James Park, and have finally got round to introducing it. If you have ever enviously looked on as an away end destroyed their shins on the seat in front, kissed strangers and ended up six rows away from where they started, this is going to be the section of the website for you. Each week I’ll start with the tifo of the week, followed by the best scenes from the previous seven days.

Tifo of the week

There are hundreds of tifos every season around the world, which can make it difficult to keep things fresh and original. No such trouble in the third tier of German football, where the infamous Hansa Rostock put on a huge display before their last home game of the season, knowing a win would save them from relegation. If you haven’t heard of Hansa Rostock before, it’s perhaps not surprising. They’ve never been particularly successful on the field, aside from a ten-year spell in the Bundesliga between 1995 – 2005.

Since then it’s been mostly downhill, with the club briefly able to return to the top flight before being relegated for good, eventually crashing into the Third Liga and not even coming close to returning since then. Indeed, they will be relegated next week away at huge rivals Dynamo Dresden if they lose and Unterhaching are able to win, and could even be relegated with a draw if there is a two goal swing in goal difference. While it is safe to say that Hansa will not be challenging Bayern, Dortmund or Wolfsburg for trophies any time soon, they are a force to be reckoned with off the field. Statistics show they have the 7th most supporters of any club in Germany, and they have developed a reputation for being completely insane.

This hardcore reputation was on show in their display against Energie Cottbus, with a large part of the tifo being formed from flags, shirts and scarves stolen from rival supporters over recent months. Dozens of different German clubs are included in the tifo, which shows a growling pitbull ripping apart these stolen items. With Dynamo Dresden and St Pauli the biggest rivals for Hansa it is no surprise that these form the focal point, but you can also see scarves from HSV, Borussia Dortmund, Union Berlin, Hertha Berlin, Aue, Werder Bremen and well, just about everyone else. There are a number of good pictures of the display below, while you can also visit http://www.suptras.de/ to see images of previous displays put on by Hansa.

For those wondering what Hansa Zane means, it appears to be intended as a play on a certain type of dog breed in Germany: 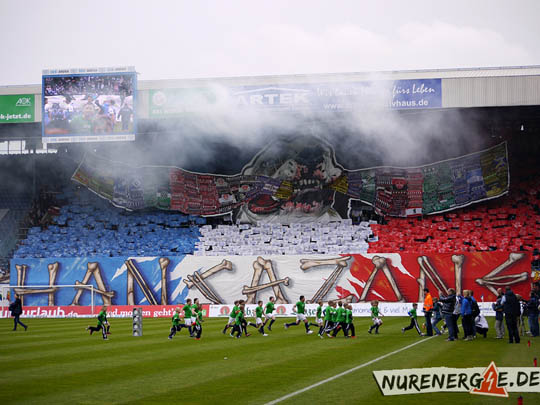 Scenes of the week

With a number of huge games including Dinamo Zagreb vs. Hadjuk Split, Spartak vs. CSKA in Moscow and Boca Juniors vs. River Plate, it was a difficult week to choose. However, with Torcida Split boycotting the derby in protest at the anti-supporter regulations from the Croatian FA and Boca vs. River abandoned following attacks on the River players, it was a little easier to decide on the winner. In the end, the inaugural winners of scenes of the week come from my favourite country to watch football of all.

In recent years, Partizan had perhaps taken for granted that they would be the champions, winning the league six times in a row between 2007/08 – 2012/13. However, with hated rivals Crvena Zvezda taking the title last year, it was always going to be more intense this time around. Not only were Zvezda the reigning champions, but their triumph last season had given them 26 titles in comparison to the 25 that Partizan could boast. As Manchester United and Liverpool will tell you, these numbers are important!

Partizan have been on the verge of reclaiming their title for a few weeks after securing a 0 – 0 draw in the crucial derby, and Zvezda’s defeat to FK Radnicki on Wednesday combined with Partizan’s victory over Napredak meant it was party time in ‘The Jug’, the section of the stadium reserved for the most hardcore Crno-Beli.

Partizan could only manage a draw on the day, but the real scenes came when it was time for them to get their hands on the trophy. Black and white smoke, flares, a pitch invasion and even the players handing over the trophy to the ultras to celebrate with – it had it all. In a vast contrast to the Sky Sports hype about Steven Gerrard having to give Chelsea a guard of honour, here’s how you really mark a title victory! 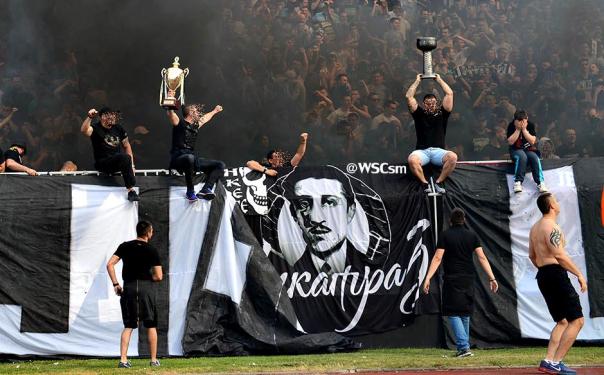 Thanks to Ultras-Tifo.net for these images of the celebratory pyro 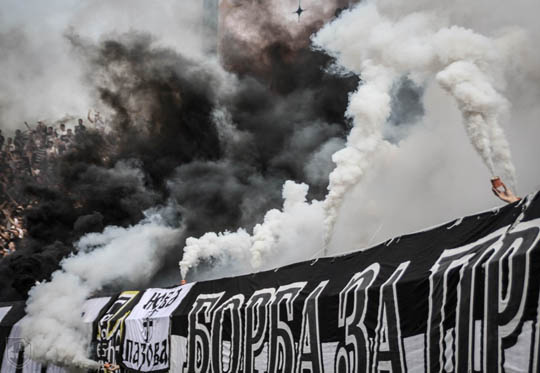 If you like this feature and would like to see it continue, please leave a comment, rate the article five stars or let me know on Twitter (@BenDudley88) so I know the desire is there for people to see this continue!

Check back next Monday for the next edition, and feel free to message me with your suggestions if you witnessed anything particularly interesting I might not have seen!