A love that knows no division

After more than 50 games in seven different countries, the second leg of the playoff final between Austria Salzburg and FAC Wien seemed to be the ideal opportunity for the perfect happy ending. Salzburg is a truly beautiful city, known around the world for stunning scenery and providing the world with the genius of Mozart. However, Salzburg is also home to one of the most inspirational stories in football, with the locals overwhelmingly choosing passion over glory.

You see, there is another team that claims to represent Salzburg. They have won the title five times since 2007, and were even able to beat Ajax in the Europa League just a few months ago. However, Red Bull Salzburg is not a football club. It has no history, no pride and no meaning, other than to sell overpriced cans of a sugar filled energy drink. They could win the Austrian Bundesliga every season for the next 100 years, and still be nothing more than an advert in fancy dress as a football club.

The greed of Red Bull stole away Austria Salzburg’s rightful place in the top division, a place they have set about regaining as quickly as possible. Starting in the seventh tier, they have made their way back up to the third. Now, they were just one game away from yet another promotion and moving within striking distance of a return to the top flight. The first leg had taken place in Vienna a couple of days earlier, with Austria taking the lead before eventually securing a 2 – 2 draw with the very last kick of the game. With the away goals rule in place, any kind of win and a 0 – 0 or 1 – 1 draw would be enough to get the party started.

Such was the level of anticipation around the game, I wasn’t able to even get close to buying a ticket when they went on sale, with members and season ticket holders snapping them up straight away. I had expected this, and ended up buying a ticket in the away end. With very little segregation in the ground, I figured I could enter via the away entrance, before sneaking off into the home stand. It wasn’t the ideal solution, but there was no way I was going to miss the game having already booked flights and a hotel for the night.

It was far cheaper to fly to Munich and then get the train across the border rather than flying directly to Salzburg, so this is what I did in the early hours of the morning. As the train crossed over the border, a number of police officers boarded the train to check passports at random. Sitting in my carriage were two families who looked as if they belonged on the set of The Sound of Music, an old man listening to classical music, and myself. Much like passing through airport security if your name was Adolf Bin-Laden, I knew I would be the one to be ‘randomly’ selected. So it proved, and they ended up asking me questions for several minutes. “You have come all the way from Holland to watch a third division game?” and “Are you sure you don’t mean Red Bull?” After showing them pictures on my phone of the last time I visited Austria, as well as matches I have attended in various other places around the world, they were satisfied I wasn’t the head of the South Wales Liberation Army, and allowed me access into the country. It was a good job I hadn’t bought any pyro with me on this occasion, or I would presumably be writing this using the Wi-Fi in an Austrian gulag.

Once I reached the hotel, I had a message waiting for me. One of the Union Ultras had heard I was coming to the game, and arranged for a ticket for me on the terrace. This meant that instead of sitting down with members of the Austrian press, I would be able to experience properly with the hardcore supporters. This late twist combined with the fact it was my last game of the season gave me even more confidence that Austria would get the job done and achieve yet another promotion.

The last minute change of plans meant I arrived in the stadium with about 15 minutes to go before kickoff, just in time to get involved with the pre-match tifo that was being deployed. The entire stand was turned white and purple, along with a large banner in the middle and a simple message at the front, reading ‘You will make yourselves legends’.

Everything was set for this to be a memorable afternoon in the Salzburg sunshine, with Austria preparing to add another glorious chapter to their remarkable story of survival against the odds. But sometimes, football is cruel. And sometimes, it’s just a complete bastard. This was to be one of those days.

The atmosphere was absolutely superb at this stage, with the supporters singing a wide variety of songs reflecting the history of the club. Indeed, I was told that one of the chants before kickoff had not been heard since the 1993/94 season, when the club went on a run all the way to the UEFA Cup final before eventually succumbing to Inter. The tremendous support seemed to be paying off on the pitch, with the Salzburg players coming close on a couple of occasions. The woodwork was struck, and the goalkeeper was tested more than once.

However, Wien had not read the script. Rather than simply turning up and losing as they were supposed to do, they refused to give up. After almost scoring a couple of minutes earlier, they took the lead after 20 minutes after the defence missed a couple of chances to clear the ball. There were a small number of away supporters, but the goal was greeted by almost complete silence. Austria now had to score at least once to secure promotion, while the visitors had something to defend to spoil the party. It did not deter the home supporters for long, who went right back to creating as much noise as they possibly could to try and inspire their team to one more comeback.

But half time arrived, and still Austria trailed. I tried to reassure my hosts by saying “It’s only one goal”, but I was worried, and so were they. After going undefeated all season, surely they were not about to suffer their first defeat in the most important game of all? Sadly, they were.

If the first half had been disappointing but close, the second was not even a contest. Just five minutes in, Wien had doubled their lead. With Austria pushing forward, the visitors were able to create space at the back and outnumbered the goalkeeper in the box. In that situation there is almost always only one outcome, and so it proved again here. It was now 2 – 0, and Salzburg would have to score twice just to take the game to extra time. The supporters still refused to give up, not yet. After all, when you have had your club taken away and been forced to start again in the lowest division, what is a couple of goals?

Despite the defiant singing from the ultras section and those supporters behind the goal, a few minutes later all hope would be lost. With Austria desperate for a goal and throwing even more players forward, they were hit on the break again. It was almost an identical goal, and now they could not rely on taking the game to extra time. They had to win, with four goals needed for their dreams to come true. It wasn’t going to happen, and everyone in the ground knew it. However, the reaction to the goal proved to me what a truly special club I had found in the Austrian mountains.

There were tears all around the stadium after the third goal went in. The dream of a return to the top division would have to wait for another year, and after all the anticipation it was too much for some people to take. Noticing the tears in the crowd, one supporter raised his scarf and began to sing the words to ‘You’ll Never Walk Alone’. Up went another scarf, then another, and then another. Soon the song had caught on around the entire stadium, and once it started it would not stop. For the remaining 25 minutes of the contest, the supporters of Austria Salzburg saluted their heroes with the footballing anthem which is so strongly linked with adversity. It was one of the most beautiful things I have ever experienced in a football stadium, and my arms were covered in goosebumps despite the heat of the Austrian sun.

Into injury time, and still they sang. They sang not for promotion, not for glory and not for success. They sang for their team, the team they loved and the one they refused to give up on. Instead of choosing the easy option of Red Bull sponsored glory, they chose to fight to preserve their history. As the full time whistle blew, you might have expected the supporters to get away from the stadium as quickly as they could due to the crushing disappointment they had just experienced. Far from it. 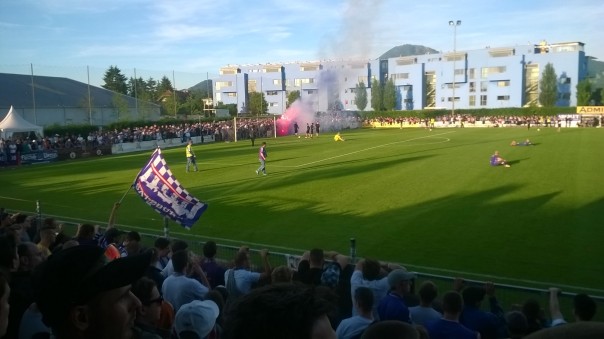 For over an hour after the game, the Salzburg supporters stayed in the ground to salute their team and thank them for the effort they had put in over the course of the season. When the whistle had gone, several players sank to the floor in tears. Dozens of fans quickly sprinted on to the pitch to console them and drag them to their feet. In an era where players are sent death threats on social media for losing or even just for playing badly, it was so refreshing to see that they retained the love and respect of their supporters despite the poor performance. 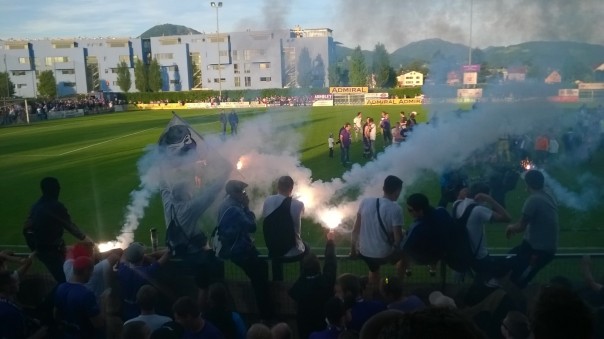 The Wien players trooped off the pitch after celebrating with their fans, and were widely applauded by the Ultras as they departed. They had deserved victory on the day, and their achievement was very sportingly acknowledged. They returned the applause to the supporters, clearly it was not just me who knew that everyone inside that stadium had been witness to something truly special.

At this stage I noticed the chairman of the club on the field speaking to the players. He had tears streaming from his eyes, and could barely stand such was his grief. With so many owners in modern football not caring in the slightest about the club, here was a man with such a deep and undying love for Austria Salzburg that he could hardly take the sorrow. Even more supporters rushed on the pitch to console him, while those in the stands chanted “There’s only one Austria chairman”.

As the last of the flares burned out and the last supporters left the field, it dawned on me that Austria Salzburg had not lost at all. Every time they step out on the field in the traditional colours is a victory for football culture, and when you have that force behind you it doesn’t matter whether you play in the Champions League or against a local pub team. The love that this set of supporters has for their side is unbreakable, and it is a love that knows no division.