How Barcelona became just a club

Long before FC Barcelona were famous across the globe for Lionel Messi, Neymar, Xavi, Iniesta and co, they were respected and admired for their motto – more than a club. A phrase first spoken by club president Narcís de Carreras in 1968, a page on the official club website explains more on what ‘more than a club’ means to Barcelona, ending by stating that:

“Barça continues to be “more than a club” both in Catalonia and elsewhere in the world, and is implied in numerous cultural, social and charity initiatives.”

It is certainly true that for countless years, Barcelona were a truly special football club, representing Catalonia through countless times where those who dared to stand up to Spanish dictatorship were punished and persecuted. In 1925 the club was forced to close for six months after supporters booed the royal march, while in 1936 many of the playing squad enlisted to fight in the Spanish Civil War against the military uprising, with club president Josep Sunyol murdered by opposition forces.

Catalonia would be occupied from 1938, with a series of restrictions placed on the club. They were forced to change their name to its Spanish form, Club de Fútbol Barcelona, while all Catalan symbolism was banned, including the badge, flag and language used by staff and supporters of the club. Despite these tough times, Barca performed well on the pitch, winning La Liga in 1945, 1948, 1949, 1952 and 1953.

This would be the last successful period that the club would enjoy for some time, with General Franco’s control of Spain eventually extending to football. He chose Real Madrid as his team due to the royal connection and the spirit of rebellion associated with Barcelona, with the capital city team receiving a great deal of state funding to help them secure the very best players. The most famous example being Alfredo Di Stéfano, who initially signed a deal with Barcelona, only for this transfer to be rejected by Spanish authorities, with the player signing for Madrid instead. Di Stéfano would go on to become one of the most iconic Real players of all time, finishing as La Liga’s top scorer five years in six years and winning fifteen major trophies – including the first five European Cups.

As Spain recovered from Franco, so did Barcelona. Club principles were restored, big players such as Johan Cruyff chose Barcelona over Real Madrid and the pride of the Catalan nation was restored. The club enjoyed some glorious times on the pitch and once again, they truly were more than a club.

But when you look at modern-day Barcelona, can you really say that this is true?

On the 17th May 2006, Barcelona won their first European Cup since 1992, defeating Arsenal 2 – 1 in Paris thanks to late goals from Samuel Eto’o and Juliano Belletti. It turned out to be the start of a golden era for Barca in terms of success, but the beginning of the end for everything admirable about the club off the pitch. This is the story of how Barcelona became just a club.

For more than a hundred years, FC Barcelona proudly refused to wear a sponsor on their shirts.

It was as much a part of their identity as the red and blue stripes or the Catalan flag, and it made them truly different to any other club in the world. In a sport where football clubs have ‘official partners’ for everything from energy drinks to washing machines, Barcelona stood alone in rejecting corporate cash.

2006 was the last year that the shirt did not feature a sponsor, but even when it was branded for the first time, Barca still did things differently. They became the first club to pay for the right to wear a sponsor, displaying global charity UNICEF across the front of their shirts, paying the organisation a rumoured £2 million a year to do so.

By introducing a sponsor in this way, fans who opposed the move would be unlikely to speak out, for fear of looking like they opposed the work done by such a good charity. The UNICEF deal lasted for many years, but with debts increasing and the money in football spiralling even further out of control, something had to give. 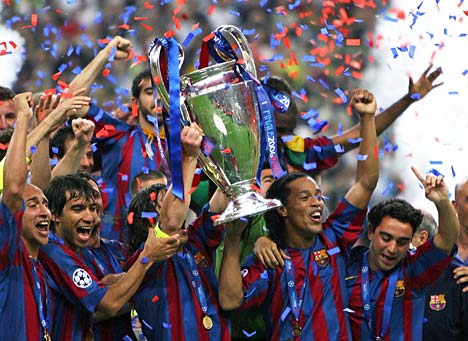 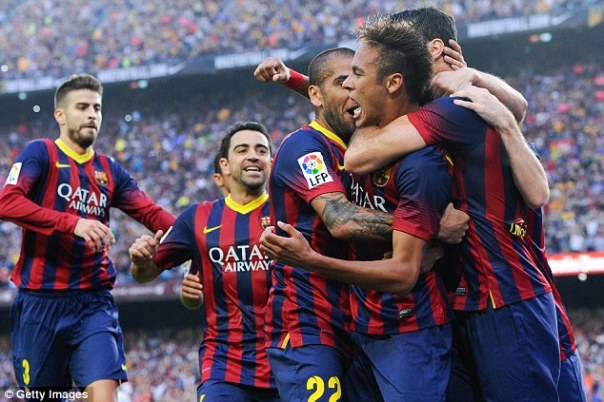 As is so often the case in football, the money came from the Middle East. Rumours abounded of a first paid sponsorship deal, with protests finally springing to life. ‘No to Qatar’ banners appeared in the stadium, and legendary player Johan Cruyff commented: “Sullying the shirt is preposterous. Are we going to throw away our independence for a sum that amounts to less than 10 percent of the club’s revenue?”

It turned out that the answer to this question was yes. Barcelona’s iconic shirt was forever tainted in the pursuit of money, as the first paid sponsorship in the history of the club was agreed. More than a hundred years of tradition thrown away for less than Lionel Messi’s wages for a couple of months, but worse was to come.

While the Qatar Foundation was a paid sponsor, at the very least it was still promoting a charitable cause. This all changed for the 13/14 season, when a deal was announced with Qatar Airways. The very last semblance of Barcelona resisting corporate greed in the name of tradition was gone. Visit the website today, and you will be bombarded with sponsorship logos, promoting everything from beer to shampoo. More than a club? Only if you use Head and Shoulders and drink Chang Beer. 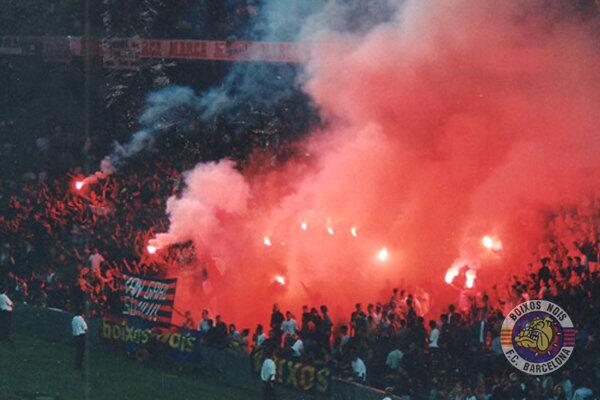 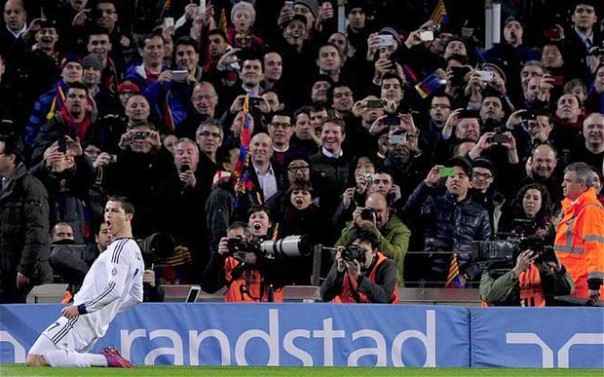 Spanish football has never had the same reputation for atmosphere as countries such as Germany, Holland, Poland and, in the good old days, England. Despite this, Barcelona used to be able to turn Camp Nou into a truly intimidating place to go. Flares would be lit, the Ultras group conducted an often fearsome atmosphere and Luis Figo was given perhaps the worst reception in football history upon his return to the club with Real Madrid.

Abuse was not the only thing hurled in his direction, with all sorts of objects raining down on Figo every time he went anywhere near the sidelines, including the severed head of a pig. While this was probably (ok, definitely) going too far, the atmosphere at Barcelona has gone in completely the opposition direction, joining the likes of the Emirates and Old Trafford in becoming more like a theme park than a football stadium.

There are a variety of reasons for this, including the fact that so many games are moved for Asian television. Spain is a country that prefers things to happen late at night, with games often not kicking off until 10pm. This did not suit the broadcasting deals that Barcelona wanted, leading to many games being moved to such times as 11am, impossibly early for the average local fan. In their place came rich daytrippers, more likely to be wielding a digital camera than a flare, and certainly far too middle class to actually get involved with chanting.

As mentioned, this is not the only factor that has changed the atmosphere at Nou Camp, leading us perfectly to…

Want a ticket to a Barcelona league game in the very top row of the stadium (several miles from the pitch)? That’ll be 58 Euros please. Want a ticket where you’ll actually be able to see the game? You’re going to need to stump up well over a hundred Euros for the privilege.

I went on to the Barcelona website to investigate how much it would cost to sit in the section of the stadium which has the famous club motto emblazoned across it. For the fixture against Valencia in the league this would cost 139 Euros at face value, while for the upcoming Champions League clash against Manchester City you could more than double this. Similarly when Real Madrid come to town (the Barcelona website lists this as a A++ category fixture), a ticket in the main stand will set you back 359 Euros.

With Spain suffering a tough time economically, it is no surprise that the true fans of Barcelona have been driven away for good, replaced by tourists and business people eager to impress their awed clients.

So, to the point which has inspired all the debate about the good reputation of Barcelona in the first place, the ownership of Barcelona and their behaviour during the transfer of Brazilian superstar Neymar.

The full extent of the transfer of Neymar from Santos to Barcelona was revealed recently, breaking down as follows:

(figures taken from The Guardian)

Remarkably then, out of the £109m paid out to secure the next Barca superstar, £94.4m of it went to parties other than his old club. The fallout over this revelation has been dramatic and swift, with president Sandro Rosell calling a press conference to announce his resignation from his post.

As part of his statement he remarked: “The right of the club members to be informed needs to be compatible with the defence of the club and confidentiality of certain matters and facts. This confidentiality is essential in the world of football because otherwise the club could be damaged.”

As you can see from the above, Barcelona has not been damaged as a club. Instead, it has become the same as almost every other successful club in the modern era. While signing the likes of Neymar will ensure that they can go on winning things on the field, they are no longer something to be admired off of it. Having resisted ‘modern football’ for so long, FC Barcelona is now unmistakably a part of it. More than a club? Not anymore. 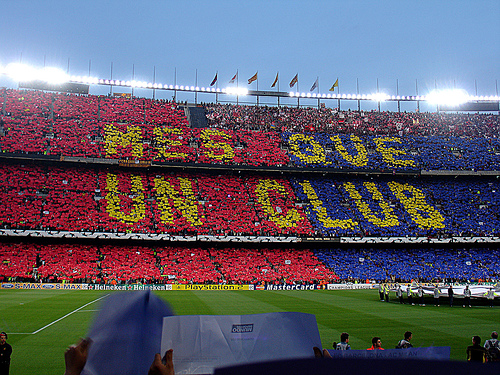