In the 2012/13 season I attended a number of high profile fixtures around Europe. A Champions League Quarter-Final, fixtures in the Bundesliga, Premier League and Eredivise, as well as the small matter of the Milan derby. With that in mind, the Austrian Third Division may not seem like the obvious place for me to begin 2013/14. However, the supporters of Austria Salzburg understand better than most how it feels to have everything that you love about your club taken away. Just as Cardiff City lost all meaning to me in July 2012, these fans had their club stolen by the growing disease that is Red Bull in football.

The changes inflicted on the club by their new owners were so dramatic that it was clear the team they loved would never return. Rather than simply accept this or walk away from the club, they took positive action and formed their own side, playing in their own violet and white colours as Austria Salzburg. Red Bull Salzburg may enjoy a great deal of success within Austria, but in the city of Salzburg one team is king. After arriving at the train station, I showed a taxi driver the address of the stadium. He spent the journey over thanking us for coming to visit “the true team of Salzburg”, as well as singing “SCHEISS RED BULL” as he ploughed through red traffic lights and charged us €3 for a journey which would surely usually be closer to €20. The people of Salzburg are fiercely proud of their defiant spirit and Red Bull rebellion, and show superb hospitality to anyone who comes to see their story for themselves. As well as numerous offers from Twitter to meet up and show me around the stadium, it was difficult to walk past a Salzburg fan without them handing you a beer and thanking you for making the trip over. In truth, it was me who should have been thanking them, as their proud football club was about to provide me with a footballing experience never to be forgotten.

In England, we are used to football grounds being located in industrial parks, amid a backdrop of McDonalds, KFC and Greggs. Not so in Salzburg, with what must be one of the most stunningly beautiful locations for a football club imaginable, surrounded by some of the towering mountains which have made Austria so popular with lovers of extreme sports. The ground was also a short walk away from a gigantic brewery which sold freshly brewed beers at dangerously cheap prices, no chance of being asked for £4.50 for a warm Carling in a plastic cup here. 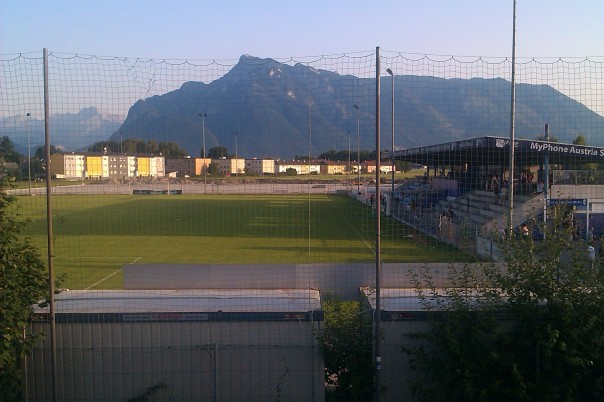 As with most European football clubs, the outside of the stadium is decorated with various graffiti. This ranged from Union Ultras, numerous anti-Red Bull slogans and less imaginatively, the word ‘PENIS’ in six foot high letters above the car park. Never did get an explanation for that one.

The Union Ultras make their mark

I had purchased my ticket (a bargain at £7.50) in the ‘Fansektor’, home of the ultras and the loudest part of the ground by some distance. The singing begun around 30 minutes before the game and never once stopped from that point, while the drinking from many of the fans looked to have begun considerably earlier than that. Flags were handed out by members of the Union Ultras as kickoff approached, helping to transform the stand into a sea of colour. It may only be a small ground, but these rebellious fans can make more noise than a crowd ten times the size. 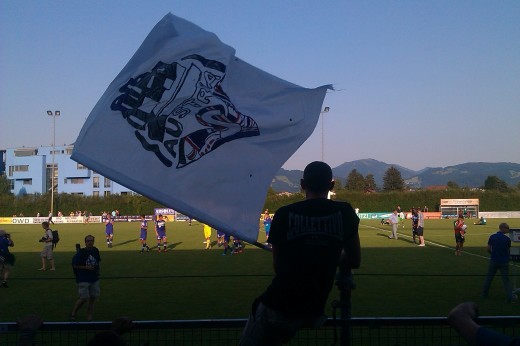 This was just the second match of the season for Austria, and there were some signs of early season rust as the game got underway. Visiting Eugendorf were a newly promoted side and should really have been swept away as they took on the biggest side in the league, but they played without fear and were able to match their more prestigious opponents in the early stages. There were no signs of discontent from the Salzburg fans at the lack of a footballing massacre, as they instead urged their side on through an impressively varied array of chants. While the support was not completely lead by the ultras, the majority of chants were influenced by a fan at the front of the stand with a megaphone and his own platform.

The support definitely had an influence on the game, Eugendorf did not seem to have a single away fan and the players were clearly not used to playing in front of such a crowd. Not only was the one main stand full, but fans were also dotted around the field and plans are in place for Austria to have a considerably larger home in the future. I noticed the Eugendorf players looking over at the supporters with a mixture of anxiety and awe, and it was perhaps no surprise that their resistance ended after around 20 minutes of the match.

There was nothing particularly spectacular about the goal, with one attacker drawing the keeper out of his goal before passing to the other to stroke it in to the open net in a manner which will be extremely familiar to anybody who plays football games on the Xbox. What was memorably, however, was the way in which the goal was celebrated. Fans leaped up and down, waved flags and numerous purple smokebombs were ignited.

While crazy celebrations and pyro being set off after goals is almost universal within the European football stadiums I have attended recently, there was one completely new feature to be found at Austria Salzburg, a member of staff employed to hose down the fans after a goal. This was presumably to ensure the supporters stayed cool in the searing heat, and not an attempt to quench any flares which had been set off. 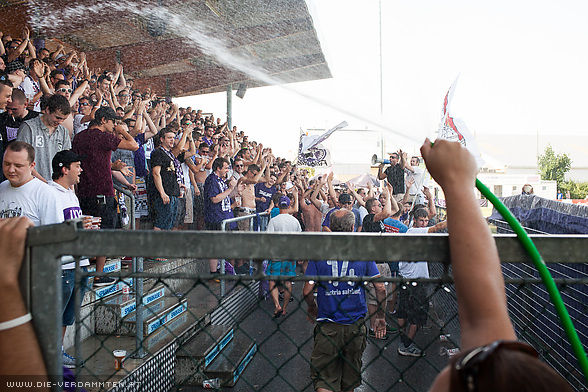 I hoped that this goal may settle the nerves and the home team may go on to achieve a cricket score (a large one, rather than an Australian one), but the visitors spirit was by no means broken by the opener. It took just five minutes for the equalising goal to arrive, the green shirted players celebrating wildly to make up for the lack of away fans. Sensing their team was going to need their help to come away with the three points, the Salzburg fans cranked the atmosphere up a notch, moving away from negative Red Bull songs to positive ones in support of their side.

Sure enough, the increased noise levels paid off just before half time, as Austria ensured they would go into the break in the lead, despite the fact the performance had not been their best. The ball ended up in the net once more, and off went the smokebombs and resulting hose, with the goal again looking decidedly preventable. It was a rough day for the man in goal for Eugendorf, I don’t know what the German is for ‘dodgy keeper’, but he was certainly worthy of a couple of renditions in a city more famous for the music of Mozart.

The superb levels of support continued throughout the second half, with the Salzburg players searching for the additional goals their fans deserved. Once again however, Eugendorf were able to draw level despite their limitations as a side. I have been something of a jinx for many home sides on my travels, with almost all of them failing to win whenever I attend. I feared that I was to be going one step closer to the football fans of Europe teaming together to ensure that my passport is confiscated, when a late surge from Salzburg ensured that the outcome on the field would be just as positive as my experience off of it.

With 20 minutes to go, Katnik scored his first of the game, powering the ball past the goalkeeper who could not be blamed on this occasion for failing to prevent Salzburg taking the lead. Katnik is a former  Red Bull player, however his performance in the latter stages of this game will have gone some way to redeeming this transgression to the fans. With the match still in the balance heading into injury time, Katnik would strike twice more in the 96th and 97th minutes, ensuring that the scoreline would finishing a convincing 5 – 2 and completing his swift hat-trick.

In truth, what is brilliant about Austria Salzburg is not what happens on the field, but the story of the club and how the supporters came together to resist corporate football. I was incredibly jealous that these fans had been able to organise a new club after having their own torn away from them. On several occasions I looked around at the passionate supporters bouncing up and down and roaring the team on to victory and thought “you lucky bastards”. They are still at the early stage of their journey back to the top of Austrian football, but the passion and the ambition is there for the violet and whites to retake their rightful place. Yet another sticker I saw on the way out of the ground depicted an Austria fan climbing a ladder, with the Champions League at the very top rung. This is a club a world away from such heights at the moment, but as my newly purchased t-shirt displaying the club motto says, these fans never changed passion for glory.

The evils of modern football can be fought against, and the sport doesn’t have to all be about money. Tucked away in the mountains of Austria, a side in the third division are showing the rest of the world the way forward. You may not have heard of Austria Salzburg yet, but you will have soon.

Posted on August 6, 2013, in Match Reports. Bookmark the permalink. 5 Comments.