← The Sudtribune, Dortmund.
The Premier League – Best in the world? →

The accidental ultra – St. Pauli away

St Pauli are one of very few teams around the world known more for their fans than their players, commanding near universal respect for the loyal and passionate nature of their support. You’ve probably come across at least one YouTube video of their supporters by now, but if not here’s a little taster.

They’re loud, they’re non-stop and they’re different. St Pauli has previously been described as the ‘punk rock football club’ and it’s not difficult to see why. Everything about the club screams ‘alternative’ and it’s a match day experience like no other. I arrived at the ground to find what can only be described as a full-blown rave, happy hardcore music blasting out of speakers and a large group of drunken Germans jumping around with the kind of enthusiasm reserved for Oasis at 3am in a Manchester nightclub. Accompanying them was a man dressed up as a zombie version of Father Christmas, playing a punk version of Jingle Bells on a St. Pauli branded guitar. And yes, that actually happened.

The weather in Hamburg was so bad I had expected the game to be off, with temperatures of -9, deep snow and plenty of rain. I had asked the guy in the hotel reception if he thought the match would be abandoned that morning, he laughed and said “Postponed? This is Germany!” Silly question, I guess.

So the match was on, ensuring that Birmingham remained the furthest I had traveled for a postponed game. That day I had ended up at Walsall vs. Rochdale for The Worst Football Match In The History Of Time (c), I was confident that the atmosphere at St Pauli would be significantly better than that dreadful day. However, there was still to be a nasty surprise in store.

Despite the unique site of Zombie Santa playing the guitar while eating a large sausage, I was keen to get inside the ground and start soaking up the atmosphere. I had booked my match ticket through a German website, confident that my limited knowledge of the language would see me through. I walked round the ground to locate the ‘Nordentribune’, taking a fairly educated guess that it would be the north stand. It was at this point I discovered a big sign which was directing the Erzgebirge Aue fans to the away end. “Great” I thought “I’ll be close to the away fans, should be a good atmosphere”.

As I walked further and further, I started to notice less scarves in the brown colours of St Pauli and a whole lot of extremely scary looking people wearing purple. It was at this stage I used my phone to translate the one German phrase on my ticket I didn’t understand.

Visitors section. Or as we call it in Britain, the away end. Oh dear.

Still, I had come to Germany for a unique football experience, and St Pauli away with the hardcore supporters of a team the other side of the country certainly counted as one of those. The first sign that this was going to be a bit different from the usual away game didn’t take long. As I handed over my ticket to a steward and indicated I didn’t speak German, he asked me “Do you have any flares or smokebombs?” When I replied that I did not, he simply said “Why not?”

Welcome to St. Pauli, where even the corner flags are cool

I took my place on the terraced away end, which was already fairly full of the hardened  away support and looked around at the impressive Millerntor Stadium. The terrace at the opposite end of the ground was full of flags and the natives were already bouncing up and down, while a large flag simply declared “BEER” surrounded by a loveheart. Simple, yet effective.

The Millerntor before kick off

As I mentioned earlier, the weather had been terrible all day and as a result the pitch was starting to look more like something a hippo would roll around in during a nature documentary than somewhere to play football. There is no way the game would have taken place in England, but as St Pauli and my rapidly adopted Erzgebirge Aue came out of the tunnel to the strains of AC/DC’s Hells Bells, it was very much game on.

The 12:12 protest (in which supporters of all German clubs stayed silent for the first 12 minutes and 12 seconds of the game) was observed, with the St. Pauli fans displaying a banner which read ‘Football without fans is nothing’ and another banner promoting fan culture which was so long it stretched all the way across the South stand and halfway across the East stand.  For the first ten minutes of the game, the Erzgebirge Aue ultras (I’m not sure if this is what they call themselves, but they looked pretty ultra to me) passed out several hundred bags of confetti. There were several hundred away supporters, and each of them had at least two bags filled to the brim with confetti. The countdown to 12:12 began, and then this happened:

It was as if a confetti bomb had been dropped on the away end, with the entire stand covered in seconds. I had foolishly forgotten to put my hood up, and I have still been finding confetti at regular intervals almost a week later. Not to be outdone, the St. Pauli fans were also making a superb atmosphere with a wide range of chanting, the majority of it in English. It seems as if the supporters of every British club sing the ‘we love you’ song these days, but none of them quite come close to the original and best in St Pauli. For the away fans, the chanting was led by two men at the front, belting out the first line of a chant and then joined in unison by everyone else.

The two men charged with leading the Aue support

The support from both set of fans was so good that at times the game was almost secondary, but it was a fierce and well contested affair. Tackles were flying in all over the place in a manner which would have resulted in a couple of red cards in the Premier League. Bodies flew through the air and slid through the mud, both sets of players battling hard for their fans. St Pauli hit the bar early on which raised the vocal levels further still, while Aue won a series of corners which eventually came to nothing. With the pitch in the poor state it was, it was perhaps unsurprising the score was 0 – 0 after 45 minutes. 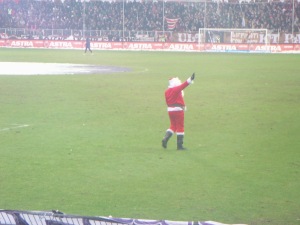 Santa makes a half time appearance, thankfully no zombies in sight this time 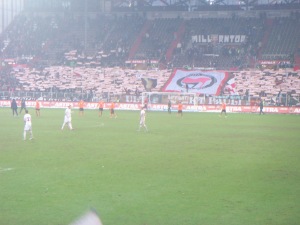 St Pauli fans display as the second half begins

The second half began with Erzgebirge Aue attacking the goal the away supporters were located behind, and they certainly treated them to an impressive show. Both sides are towards the lower regions of the 2. Bundesliga, with Aue in danger of sinking towards the relegation spots if they failed to get a positive result here. Just four minutes in to the second half, Aue scored. I’m not really sure what happened in the minute or so following that, apart from the fact it was more like a mosh pit than a football stadium. The away fans linked arms and bounced up and down, and then left and right (not to mention quite a few of them falling on the floor). The air filled with beer, as many of the away supporters sacrificed their half time drinks to celebrate. I also discovered why the steward from earlier had been so bemused by my lack of flammable objects.

The worlds worst photo of a flare

The St. Pauli fans responded to their side falling behind by singing a little louder and jumping a little higher, desperately trying to give their team a boost. It was all in vain however, as Aue seized the momentum and took control of the game. While the St. Pauli players never gave up (and with some of the craziest fans in Germany, why would you?), Erzgebirge were now firmly on top. The remainder of the game was a procession of chances for the visitors from the mountains, with a number of shots on goal for the Pauli goalkeeper to deal with.

With around 20 minutes to go in the game St Pauli won a succession of corners and looked as if they may yet get back into the game, an incredible noise coming from the bouncing drunken home fans. This hope was shattered the next time Aue got the ball, a superb long-range shot beating the goalkeeper, hitting the inside of the post and rolling into the net. The fans went wild all over again, with one fan dropping his recently purchased Bratwurst and letting out the kind of “NOOOOOOOO” only usually seen in a war film as Little Johnny bites the dust. The clock wound down to the end of the match, but there was still time for a third and final goal, the enthusiasm for celebration not dampened by the large scoreline.

Aue fans climb the away end fences to celebrate


St Pauli were finally put out of their misery, the 3 – 0 victory for the visiting side confirmed. Away fans in Britain have become used to the players giving a polite clap in their direction before heading off the pitch as quickly as possible. As you will see from the video below, this is certainly not the case in Germany.

The players kneeled before the away end, while players and fans alike made the ‘two crossed hammers’ sign, the fans performing a chant before the players jumped up and danced around in celebration. It was a true sign of respect between the players and their supporters, highly refreshing to see with what we as football supporters have become used to in the modern-day game.

The fears I had had before the game of being sacrificed by a large group of angry German hooligans had completely vanished, thoroughly enjoying my time as an Erzgebirge Aue ultra for the day. One of the fans stood next to me had clocked I was an outsider, presenting me with his ‘zwei gekreuzte hämmer’ (two crossed hammers) scarf and saying I could now officially call myself an Erzgebirge ultra. From standing on the Sudtribune at Dortmund to accidentally becoming an ultra, my trip deep into the heart of German football showed me a football paradise. If football was like it is in Germany everywhere in the world, the ‘Against Modern Football’ movement would never have existed. I can only dream that one day the way fans are treated in Germany is the rule, rather than the exception.

← The Sudtribune, Dortmund.
The Premier League – Best in the world? →